Sewing embroiderers and embroidering sewists are the most likely (and most targeted) buyers of combo machines such as Brother SE625 Computerized Sewing & Embroidery Machine. Brother has made this model with versatility in mind. It’s not exactly a jack of all trades, but it can certainly be a great tool for those who have only just acquired a taste for various crafts. Or even committed sewists and embroiderers who need or want to do both.

But there’s one thing that’s always on my mind when I come upon a combo model. Which of the two things does it do better? Does its sewing functionality suffer at the expense of embroidery, and vice versa? I tend to be naturally suspicious of multifunctional units. Maybe it’s just me being a bit old-fashioned. I would always prefer a machine that excels in few areas than a super versatile one that does everything – and does it in the “meh” manner.

So, I am writing this review to determine which category this machine really belongs to. First, we’ll see the obvious – overview and features. Then, we’ll dig under the hood and see if it’s worth your money. 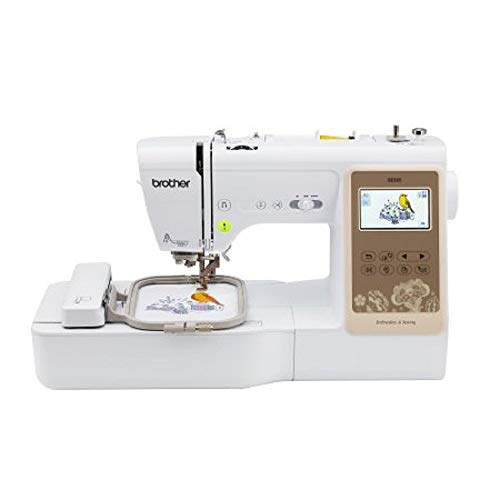 On the surface, this machine appears to be just enough versatile to attract both sewists and embroiderers. Its modern looks should make it a stylish addition to your sewing nook or cabinet, without too girly or bright colors that scream creativity and joy. But I know most of you aren’t here for the looks. Let’s see what it can do, according to the specifications.

Every embroidery enthusiast will be primarily interested in the work area. The hoop is of an average size, 4×4 inches. Whereas many machines exclusively made for embroidery will outdo SE625 in this regard, with 5×7 or even 6×10 hoops (often combined), I believe 4×4 is just enough for most projects you’ll be dealing with. Unfortunately, the machine won’t take a separate larger hoop, so you will have to make do with what you have. If you want, feel free to purchase a separate smaller hoop, though.

Embroidery designs would be another crucial concern. You will get 280 designs total, 80 of which are built-in, and the remaining 200 on the included CD. Among them you will find decorative alphabet, nature, holiday, sports, floral, kids and other designs. But that’s not all you can hope for. The USB port allows you to import literally limitless designs that you can download from the Internet. Or you can do it directly from the machine, by hooking it up to a computer. You can either go to iBroithery.com, Brother’s official online repository of designs that you can purchase or get for free. But you won’t be limited to that. There are plethora of other websites where you can download patterns and designs, many of which are free. More on that in a separate blog post!

Anyhow, I prefer the USB option over direct downloading from the Internet. Firstly, there’s less chance to catch some nasty virus or other malware that could make a mess. Secondly, I don’t like to clutter my machine’s internal memory with temporary files that could cause disruption and lagging further down the road. So, I would highly recommend you to stick with the USB stick. Note that the latter isn’t included in the package, but you most certainly have one or two hanging somewhere around the house.

Sewists will be pleased to know that this machine comes equipped with 103 stitches, among which you can count on a variety of decorative stitches and eight styles of one-step automatic buttonholes. Admittedly, it’s not an immense number of stitches for a computerized machine. Many of them feature hundreds of stitches. But we can’t expect too much from a combination machine that is meant to suit different purposes, such as this one.

If you are a quilter, I wouldn’t recommend this model. There are much better, specialized machines for quilting or sewing and quilting. However, if quilting is just one of your many interests, you will be able to do some of it, thanks to the expanded needle-to-arm workspace, with 6.4 x 4.1 inches in width and height. That’s probably not enough to deal comfortably with very bulky quilts, but should be just fine for normal size projects. The drop feed dogs allow for free-motion quilting, but there are no special quilting feet.

Every sewist has to deal with small and tricky areas, be it cuffs, sleeves, baby clothes, and other circular objects that are normally hard to access. With Brother SE625, it won’t be a problem, due to the convertible free arm option. It’s nice to know that the “computerized” part isn’t just there to account for better sales. The machine will automatically stop when you’re low on bobbin thread, and it will let you know how much time you have left till you run out of it completely. Also, once you’re done for the day, it will memorize the settings so you can comfortably get back to it tomorrow, without any hassle. Other automatic functions include needle up/down position, a button to start and stop stitching, automatic thread cutter, as well as variable speed control. It means you won’t need to rely as much on the foot pedal. If you’ve never worked on a modern sewing machine, it might sound weird, as the foot pedal might seem to be an indispensable tool. But you’ll quickly realize that it’s not. It’s great to have an alternative.

You can also wind the bobbin automatically. As with most Brother machines, it’s a jam-resistant, top drop-in bobbin, which is very easy to put in place. And yes, just like with many other Brother models (even some of the cheapest), you don’t need to thread the needle manually. It’s very easy with automatic needle threader, and won’t take more than 10 minutes to figure out. Later on, when you learn how to do it, it will be a breeze. Quite a relief, especially if your vision is poor like mine.

As you may very well know, we aren’t stuck with what’s included in the package when it comes to presser feet. But it’s still very nice to have good equipment right in the box. It saves quite a lot of time, and to be completely frank, a significant amount of money too. That’s why I was very pleased to learn that this machine includes seven feet:

Another thing worth noting is that the feed dogs have seven points, which means they will feed your fabrics (any fabrics, that is) in a smooth and nice way, without bunching up. Plus, you can drop them if you want to do some free-motion sewing.

Before I made my first encounter with computerized sewing machines, a mighty LCD screen was basically the only way I could recognize them. I suspect it stands for many other sewists as well. While it’s certainly not the most important thing, it’s still a very user-friendly feature. And that’s why I love having it. So, let’s see what this one can do.

It’s a large, 3.2-inch Sew Smart color touchscreen display. It will show your embroidery designs in full color, but that’s far from being the only thing it does. You can edit your designs right there on the screen with embroidery pattern Drag and Drop feature, manipulating individual thread colors, moving your lettering, adjusting the designs to the smallest detail. You can easily resize, move, mirror image, or rotate your design. It’s an awesome possibility that accounts for countless options. Using this touchscreen display is so simple that you won’t even need any explanations – just play around till you get the hang of it.

Setup and Ease of Use

The LCD screen I just mentioned won’t just make sewing and embroidery easier. It will also help you through the setup process. Apart from the owner’s manual, you can also view and consult eight built-in tutorials, showing right there on the screen. They will help you with positioning the embroidery arm and hoop, placing the upper thread, using automatic needle threader, winding and inserting bobbins, switching feet. As you unbox the machine, you will find a number of nice tools and accessories that you would otherwise have to buy separately. Four bobbins, three bobbin clips, four spool caps, 6-piece needle set, a screwdriver, a spool net, scissors, cleaning brush, a power cord, and a foot pedal will be there so you can start stitching right away. What I especially like is that the machine comes with a dust cover. It should be a must for every machine if you ask me, but it’s not. One thing less to worry about!

While we’re at it, the machine has a small accessory storage on the front. Even though you won’t be able to tote many items there, it’s still a very convenient place for keeping spare bobbins, needles and other tiny stuff.

What Do Users Say?

There aren’t many user reviews on the Internet, and I assume that’s because most people will opt for a 1-in-1 instead of 2-in-1 or 3-in-1 (you name it) models. The few more detailed ones that I could find are mostly written by novice craftspeople who are generally satisfied with the machine’s functionality.

It can handle lighter workloads without any issues. One user reported the automatic threader breaking on her, and she just had to resort to manual threading. I must say it’s not a rare occurrence with most modern low-end models, be they Brother or some other brand.

Even though the name says “Sewing and Embroidery”, I would turn that around and say it’s primarily an embroidery machine with additional sewing functionality. If you want a mid-level sewing machine, you could buy a significantly more powerful workhorse at the same (or roughly the same) price.

However, embroiderers who sew occasionally will really enjoy working on this machine. Even with the not-so-big hoop, it provides an ocean of options. More importantly, the stitch quality is very smooth and even, so you can completely trust it with almost any project.

This machine is nearly identical to its predecessor Brother SE600 (read my full review of it here). The only difference between the two models is that SE600 doesn’t include a CD with 200 designs. However, in the Internet era, I wouldn’t consider that much of a problem. What Is Felt and How to Use It in Sewing?

How to Pick the Best Sewing Machine Case – The Ultimate...