Today’s market is flooded with inexpensive sewing machines that are packed full of features, with thousands of functionalities that your grandma couldn’t even dream of with her Singer. However, that doesn’t mean that choosing a new model got any easier. On the contrary – if you’re looking for a new workhorse, you’re in for some serious puzzlement.

And sewists won’t encounter near as much trouble as quilters will. Most machines that are advertised as sewing and quilting machines won’t do nice work in both areas. Some of them won’t do nice work at all. That’s why I decided to write an honest, in-depth review of Brother XR3774 Sewing & Quilting Machine, which is one of the most popular and affordable options out there.

The tagline says that it’s a full-featured sewing and quilting machine and “the least expensive Brother model that includes a wide table for large scale projects”. While I don’t doubt that this is true, I always like to try out a product for myself before I come to a conclusion.

Before we dig in, let’s get one thing clear. You won’t find millions of bells and whistles in this Brother XR3774 model. And that is completely fine! I prefer to have a machine with a few functions that work well than a feature-rich one that underperforms in just about each of its many areas. So, here’s a list of the things you’ll get:

What Do Sewists Say?

Overall, the Brother XR3774 machine has a pretty good rating on Amazon. Out of over 500 buyers, 76% awarded it five out of five stars. Another 14% gave it 4 stars, which means the number of negative reviews is pretty low.

Beginners agree that Brother XR3774 is a very user-friendly contraption. Even those who had no prior experience at sewing had an easy time setting it up, either by following the instructional DVD or the printed owner’s manual. Quilters appreciate the walking foot and the wide table, since both of those would cost nearly as much as the machine itself when bought separately. Another thing that everybody seems to be happy about is that the Brother XR3774 machine is pretty quiet. Even though that’s not uncommon with portable machines, it’s still worth mentioning.

Final Verdict – Is It Worth Buying? As always, this largely depends on what you actually need. If you are after an entry-level machine that will be easy to learn, then yes, it’s absolutely worth buying. It’s more than affordable and can fit almost any budget. And it will handle most basic projects, whether it’s home decor, garment sewing, or basic quilting.

However, seasoned sewists won’t get much from it. If you need a stable and sturdy workhorse, it’s best to skip this one and keep looking, assuming you’re ready to spend more money. With this Brother XR3774 model, it just wouldn’t be fair to expect wonders. It will sew through a wide variety of fabrics, but it would be best not to feed it heavy-duty ones. It just wasn’t made for that kind of job.

As I said above, quilters should not rely on this machine to deliver big or complicated projects easily. For a slightly more advanced version that also includes a wide table, you can check out my review of Brother XR9500PRW. 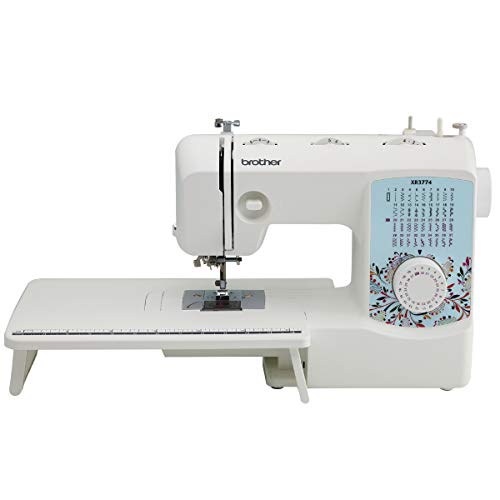 How to Use Overcast Foot – Best Tips

How Much Is My Sewing Machine Worth?

Knitting Accessories That You Just Must Have

How to Choose the Best Iron – Ultimate Sewer’s Guide